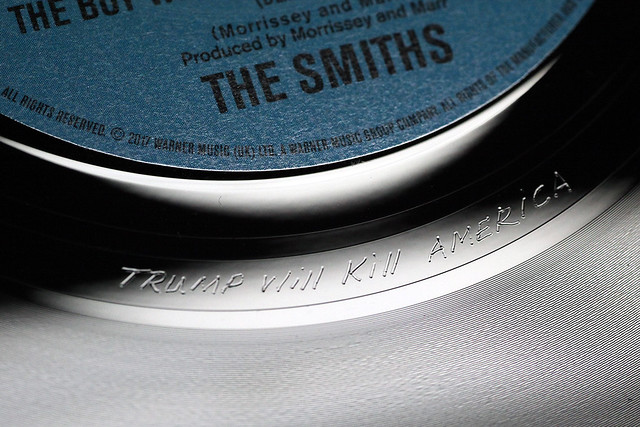 Record Store Day buyers in Europe who’ve already snatched up copies of the hotly anticipated new 7-inch from The Smiths —  featuring previously unreleased versions of “The Boy With the Thorn In His Side” and its original B-side “Rubber Ring” — have discovered a biting political message inscribed in the 45’s run-out groove: “Trump will kill America.”

Smiths fans began reporting the etching late Friday (see tweets/photos below). A stand against Donald Trump is not a surprising sentiment given the band’s past political stances, and more recent pronouncements against conservative politicians by both Morrissey and Johnny Marr. Morrissey, in particular, has made no secret of his disdain for the new American president.

The design of the single’s Albert Finney-starring sleeve, as one buyer noted, is credited simply to Esteban, or Steven — Morrissey’s first name — in Spanish.

The single, released by Rhino/Warner Bros., includes a “demo mix” of Queen is Dead track “The Boy with the Thorn In His Side,” and the “early Drone Studios version” of “Rubber Ring,” later compiled on Louder Than Bombs. Both are previously unreleased.

‘Trump will kill America’ etched on the vinyl. #TheSmiths being The Smiths. #recordstoreday2017 #RSD17 pic.twitter.com/U0ig1yAsWQ

Hard to see but the Smiths vinyl is hand-etched with "Trump will kill America". Word. ✊🏼 pic.twitter.com/oO1dBq2E1O

My boyfriend is better than yours, I love it especially because it has Trump will kill America etched into it. @parrot_flies #thesmiths #jumborecords #rsd #rsd2017